Still sufficiently close that I could see them having some cultural aspect in common.
Ten Pound Hammer 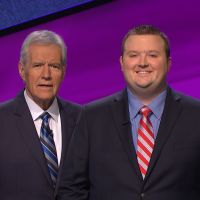 Kind of sussed out Chamonix from Chamouni, but couldn't remember if it was in France or Switzerland, so I guessed Matterhorn. Not super familiar with Mont Blanc.

35 correct responses including Bloomberg and Ballmer (hooray for sports knowledge). Whiffed on all 3 DD's.
Top

TenPoundHammer wrote:I have no idea what Chamouni is, and it doesn't seem to point to anything specific as far as how the word sounds, so I was high and dry on this FJ! Just as well since I've NHO Mont Blanc.

(Also, Chamouni sounding French? The hell it does.)

It was a host of the Winter Olympics.
Top

hbomb1947 wrote:I was rooting for Bill, whom I have the good fortune to know personally, and I was disappointed to see the result. He played well -- he played the game it was meant to be played -- and it was a tribute to his resilience that he was still in the mix going into FJ even after missing both TDD's. I also know how hard he prepared after he got The Call. Sometimes it just isn't your day; DH Kendall's sig line comes to mind.

Congrats to Katrina on the win, although her FJ wager was . . . perplexing. I had no chance on the FJ -- I never would have thought of a mountain as "lines" in a vale. Chamouni pointed me to France but I couldn't think of any "lines" in France.

I think the reference to "lines" was to the lines in the poem.

That was tough to watch - Bill clearly killed based in Coryat, but, as we've seen so many times before, the lights do crazy things to the best of us. But way to get back into the game!

Something else that's weird is that it seems like usually when the writers are expecting one answer, and they get a different one, Alex mentions the main answer. Here, he didn't register any surprise at all at the "greatest common denominator" response. Was that the response on the card?

Can other contestants challenge a response accepted as correct?
Top

danspartan wrote:3rd going all in there is GTO. I often argue that betting small there is also ok based on the frequency of 2nd massively over betting in this situation and the high likelihood of 1st cover betting.

But never going to call 3rd betting it all there a "bad" bet when it's GTO.

Game theory optimal. In this case, the most rational wagers are a big cover bet from 1st and a small bet from 2nd. The only way then for 3rd to win is for first and 2nd to miss and 3rd to get it right. Since 2nd is going to bet small, 3rd might as well bet it all, since he has to be right to have a chance.
Top

I wonder Annie gets her DD without "Kinte" in the wording? Juffure was all I needed.

Bill can play the "What If" game and I don't envy all the places he can keep revisiting. J! can be a cruel game sometimes. If his ears were ringing tonight it must have been because of all the SRI LANKAs said across the country.

I'll add one more in the tally column for White Cliffs of Dover. Chamouni = French and Shelley = English had me torn. Even if I had made the connection that Chamouni was like Chamonix I just know I would have guessed Matterhorn.

Instead I took a stab that perhaps the White Cliffs were visible from France and covered the French side of the clue that way. I guess I already used my allowance of geography luck getting the Sri Lanka and Russia/Prussia DDs correct.

So much for my wish of a Dodie Smith to Dalmatians to Croatia clue.

I can't be wrong until it happens, but I'll predict there will never be another J! champion named Katrina in the time of Alex Trebek hosting.
Top

It took me way longer than it should have to realize Chamouni was Chamonix, but when I did Mont Blanc came immediately. I'm a skier and Chamonix is a legendary skiing town. The town's official name is actually Chamonix-Mont Blanc.

So how else were you supposed to get this one other than the already established "guess an animal that might possibly maybe be anywhere in northern Africa"?
Ten Pound Hammer

So how else were you supposed to get this one other than the already established "guess an animal that might possibly maybe be anywhere in northern Africa"?

What the hell more do you need?
Top

So how else were you supposed to get this one other than the already established "guess an animal that might possibly maybe be anywhere in northern Africa"?

Well, in theory, you could actually know the necessary fact. But I'm guessing nobody on the JBoard got it that way. I think we all figured method of transportation associated with North Africa ==> gotta be camel.
Top

Congrats to Bill on a game well played. It didn't work out, but he made all the right moves. I second-guessed myself on the Sri Lanka DD and switched to Indonesia.

TenPoundHammer wrote:I have no idea what Chamouni is, and it doesn't seem to point to anything specific as far as how the word sounds, so I was high and dry on this FJ! Just as well since I've NHO Mont Blanc.

(Also, Chamouni sounding French? The hell it does.)

It was a host of the Winter Olympics.

The very first, even. Too bad I didn't realize that Chamouni and Chamonix were one and the same. Mighta had a chance with this FJ.
Sprinkles are for winners.
Top

No idea for FJ.
Top

MarkBarrett wrote:Instead I took a stab that perhaps the White Cliffs were visible from France and covered the French side of the clue that way.

Thats what I was going for, and it looks like they are:

I made a music video with NASA's new telescope!
Top

I made the Chamouni-Chamonix connection, only to whiff on its location in the French Alps and guess Lake Geneva.
Top

Oy, another brutal game! I thought the guy would runaway with the game but his geography was a weak spot. Odd betting again but I usually don't get too worked up about that. I wonder how long the new champ will last.
Top

Like a few others here (e.g. hbomb) I "knew" Bill (well, perhaps others have met him personally, but I just know him from trivia circles like LL) and he was definitely my cheering interest. I was quite pleased with the game - of course I would have liked a different outcome, but he definitely showed me that he was the strongest player there with his aggressive wagering (and with the stuff that man knows I'd wager big too) and getting the lion's share of the clue, I had no doubt he'd wind up with the biggest Coryat. It was a shame that the only clues he seemed to have a massive brainfart on were the Daily Doubles, the most important ones. But Bill joins the ranks of several players that made an awesome impression in their first and only games, I'd say the list is big enough for them to be invited back in a tournament.

I knew what Chamouni was from the Chamounix Mansion in Philadelphia. I remember it's spelled differently from the Alpine village because it has Unix in its name.

Unix is a computer operating system, for those of you in Rio Linda.
I'd rather cuddle then have sex. If you're into grammar, you'll understand.
Top
Post Reply
129 posts