OPENING REMARKS
Alex: Thank you, Johnny. Hi, everyone. Will this be the big turnaround day for Steve and Claire? The scores you see in front of the players will disappear in a few seconds, and those totals will be added to what you earn today to determine the champion. So good luck. Here we go. Now the categories, starting off with...

THE SCHOOL YEAR $800: This Pennsylvania college was founded in 1832, 31 years before it served as a field hospital
(Alex: Claire?)
(Claire: What is Davidson?)

Alex: Welcome back. This is the one and only time on Jeopardy! when the players get to talk about anything they want. Steve Mond, go for it.

Steve: Gonna say hello to my son, Nate. He is 14 years old and good for about 5 or so correct responses a game already. And as he gets older, that number's gonna go up, and my number's gonna go down, so it is a matter of time.

Alex: Did he give you any advice before--when he found out you were gonna be in this tournament?


Alex: Larry Martin, what about you?

Larry: Can I tell you about a favorite Marvel News interview?

Larry: Second grader interviewed one of the most famous men on the planet, and I see his sport's on the board. But he needs to remain nameless, because she did a wonderful interview with him, some of the best questions I've ever seen, and his answers were long and interesting. But she spoke--

Alex: What sport are we talking?

Larry: I don't wanna say. She spoke to him by telephone, but then he sent the answers by email. And she came to me and said, "Mr. Martin, I'm sorry, it's a little bit late, because, well, he had to stop high school early to go play, and we had to fix a lot of his spelling mistakes."

Alex: I'm not going to volunteer the sport or the athlete I'm thinking of.


Alex: All right, Claire, your turn.

Claire: I just want to say salvete to all of my students and my Latin-speaking community in Lexington. And I also wanna thank my husband, John, for the countless hours he spent helping me prepare for this.

TRIPLE STUMPERS IN THE JEOPARDY! ROUND
HOME ROOM $400: Like "pad", this 3-letter word for a room was once often used after "bachelor"

ISLANDS $1200: (Sarah shows a map on the monitor.) Between Cuba and Puerto Rico, you'll find this politically divided island that was named by Columbus, who landed there in 1492

ISLANDS $2000: New Caledonia & the Loyalty Islands in the South Pacific are part of an overseas possession of this country
(Steve: What is Australia?)

VENUSIAN MONOLOGUES/MARTIAN CHRONICLES
Two-thirds for first place.
Larry: Wager $9,401 to cover Claire.
Claire: You need to wager $3,301 to cover Steve's doubled score, but no more than $4,100 if you want to top Larry on a Triple Stumper.
Steve: Seeing as you don't have enough money to win on a Triple Stumper (you will lose by at least $1,600), you might try betting $5,701, playing for a win if Claire tries to two-thirds Larry (though, from this position, a wager of all $9,000 is acceptable and perhaps preferred as it forces Claire to cover you).

FINAL JEOPARDY! CLUE
230 miles long, it defined a boundary between a colony founded by Quakers & one founded by Catholics MISCELLANEOUS INTERESTING CLUES
PUTTING THE VICE IN VICE PRESIDENT $1000: Schuyler Colfax, No. 2 to this military hero, got implicated in shady contracts to build the Union Pacific Railroad
(Steve: Who is Andrew Jackson?)

SOCCER $400: In 2016 Neymar led this nation to its first-ever Olympic gold medal in soccer
(Larry: What is Argentina?)
...
(Alex: The Olympics were held in Rio. Hometown team.)

ARE YOU THEIR GOD? $1200: Teutonic gods Saxnot, Woden & Thunor had to be specifically renounced at the Saxon version of this Christian rite
(Steve: What is exorcism?)

FINAL JEOPARDY! CLUE
230 miles long, it defined a boundary between a colony founded by Quakers & one founded by Catholics

Larry skated right by a few hiccups such as the wrong Olympic-winning soccer country and the wrong St. island (Kitts) to complete the American Virgin Islands. By the time the DJ! round was over the match was over.

The FJ! clue asked of me to identify the Quaker & Catholic colonies and from there to name what defined their boundary. Like Claire and Larry, I can handle that one. Yay, up to 60% for the tournament with 3 right each week.

Nice work by Larry to earn the spot in the ToC even with a somewhat awkward interview segment with Alex.
Top

Posting here to have it on the board in case I want an easy place to find it again:

A comparison of the three most recent winners of the Teachers Tournament: In the old days the winner of the Seniors Tournament went to the TOC. Larry must be over 50 years old so a guess for how he does could be a look back at how the Seniors champs did in the TOC:
S, S, S, Q, F3, S, F3, Q, Q, Q

That’s 6/10 that made it to the semis with two of those getting third place in the finals. If David Clemmons from above is included then that is another for out in the quarters.
Top

Quaker colony is of course Pennsylvania. Now what was a Catholic colony? Maryland! Mason-Dixon line it is!
Top 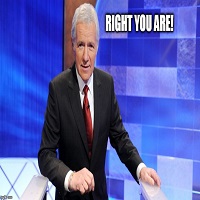 Once Larry got the 2nd DD, he put the tournament out of reach. He was far and away the best player in the tournament and deserved to win; even to the point where Alex complimented him at the end (a rarity for him).

The Mason-Dixon Line was on the tip of my tongue. I knew it was a line, but couldn't think of it.
Top

Congrats to Larry, giving those of us who have orbited the sun 50 times hope.
Top

It's like Claire wasn't even playing to win the tournament. Larry's smart wager on his DD all but locked up the championship for him.

I thought FJ! was too easy. (A boundary between 2 colonies? Surely it can't be the Mason-Dixon Line.) Spent the last 25 seconds trying to think of any other famous boundaries.
Top

I thought FJ! was too easy. (A boundary between 2 colonies? Surely it can't be the Mason-Dixon Line.) Spent the last 25 seconds trying to think of any other famous boundaries.

If you mean Claire's FJ wager, she probably realized that there was no way for her to catch Larry - barring Larry needlessly wagering anything at all today. That being the case, she wagered to stay in second place.

That said, unless she was really worried about the category, the standard $2000 wager on that DD wasn't optimal.
Top

I thought FJ! was too easy. (A boundary between 2 colonies? Surely it can't be the Mason-Dixon Line.) Spent the last 25 seconds trying to think of any other famous boundaries.

If you mean Claire's FJ wager, she probably realized that there was no way for her to catch Larry - barring Larry needlessly wagering anything at all today. That being the case, she wagered to stay in second place.

That said, unless she was really worried about the category, the standard $2000 wager on that DD wasn't optimal.

Not the FJ wager. It was the DD wager you mentioned that was being referred to. Granted, it wouldn't have mattered in the end, but still.

This board felt really schizophrenic, so between that and all the Forrest Bouncing, I couldn't get a feel of the difficulty.

The last time I went to Terre Haute, I got to see the nearest surviving Stuckey's to me. It was in dire shape then, and has since closed.

No guess on FJ! I could've taken 200 guesses and I doubt I'd have even landed on the US at any point.
Ten Pound Hammer

Oh that 2nd DD wager. I mean, she couldn't have known that they'd highlight Hispanola on a frigging map and ask you to identify it (seriously, J! writers!?), but down 10k after the first day, that was the spot to go TDD. At least it didn't matter in the end.

That last names of literary characters category that came up in the DJ round seemed brutally hard.

I was happy to get the Lach trash on France, from New Caledonia.

FJ was an instant get, and it saved me from being shut out for the week. Also, this FJ clue reminded me of the Dixie question that came up in LL recently.

Larry was mighty impressive in this tournament. I thought that he may have been getting mentally fatigued there for a second, but he recovered nicely. I can't wait to see what he can do in the ToC!
Top

Instaget FJ, agreed this was likely the easiest of the tournament.

Agree 100%, I was happy for him to pull through and it was nice to see the hugs exchanged at the end as well.

Thanks MB for the stats breakdown, his numbers are eerily similar to Jason's. I'd certainly put Larry in consideration for a gold rating come ToC time.
Top

Curious (maybe a good one for the poll?) if there are any others who got this as a result of Austin Rogers getting a Mason-Dixon Line DD. Seeing that clue (both during Austin's games and then in a Austin highlights supercut on Youtube) made it stick in the mind of this West-Coaster that Maryland and Pennsylvania are the Mason-Dixon Line states; if you know that , this is an easy final. So, instaget for me, and a much easier board in general than yesterday's.
Top

Easy Peasy FJ.
New Caledonia faked me out. Was sure it was UK.
Top

Congrats to Larry and great efforts by Claire and Steve!
Top

Larry: Wager less than $999, and enjoy your victory.
Claire: Larry has you locked out. Bet $4,501 to cover Steve.
Steve: You can take second place if Claire misses FJ, but you have to wager $0 and no more.
Top

"Colony" actually led me AWAY from the US.
Ten Pound Hammer