FINAL JEOPARDY! CLUE
The original title of this 1900 classic included a gem; another working title mentioned a Plains state

The Wednesday graphics: I'll look into figuring out the J! contestant in the Hobbies clue a little later.

Jason's astronaut/crossword puzzle story had me guessing it was Alan Bean before he gave the name.

Five more clues left today for 13 this week and a 4+ average after three games.

Carolyn worked in a shout out for her FJ! response. Perhaps she should have spent more time on the clue itself since her miss cost her second place.

I matched Frank for the longer title although I knew I could have gone Jason's way just as well to be correct.

Jason had $14,000 after the first segment for a great opening on his way to matching Dan Pawson, Jason Keller and Buzzy Cohen with nine wins. Zuffranieri's $233,243 easily eclipses the 9-day winnings of the other guys.
Top

That's her for sure. Thanks. 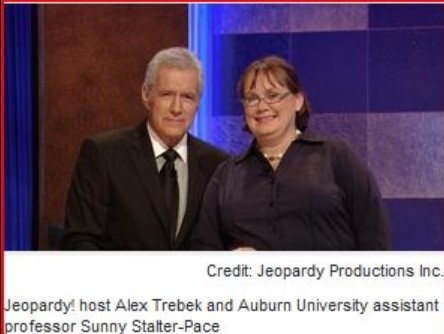 Not ruby. They were silver in the book.
Oh, what has science wrought? I sought only to turn a man into a metal-encased juggernaut of destruction powered by the unknown properties of a mysterious living crystal. How could this have all gone wrong?
Top

I misread the "Rolling Stones" clue and thought they were asking for a Rolling Stone ranking of most popular hit songs. Not recognizing the other two song titles, I was instantly lost.

What does sausage have to do with a waltz? I almost WAGed "polka".

For some reason I kept brainfarting 4-letter words. Zinc, loon, and data were on the tip of my tongue but I couldn't spit them out.

Plains state... Kansas? We're not in Kansas anymore. Does that check out to gem? Um... ruby slippers, emerald city, yeah, I'd say so. Wizard of Oz it is.

LT: Thank You for Your Service, Cossacks, gigue/jig

Really surprised this wasn't a triple get. 1900 + Midwestern state + gem is a lot of TOM.
Sprinkles are for winners.
Top

I was happy to pull a rare modern pop music get (Ariana Grande; that song is featured in the KidzBop commercials that play on Nick Jr.)

I hope Jason's DD1 wager puts to rest all the nonsense about how his wagering is too conservative.
Never been on J!, but once won a knockoff version that aired on local access TV.
Top

Hmm all that talk about no more shout-outs and what they would do if someone tried it. Apparently...nothing.
Top

I hope his mother (?) is happy that he referenced her birthday (?) (was he going with June 1, 1943? I assume so, maybe it was random) because he cost himself over $19,000 with the shout-out. This would be less unfortunate if he hadn't literally wagered almost exactly $6,143 a few clues earlier, where it was an appropriate amount, and could have easily done so then.

That came out far harsher than I meant it to, because I am beginning to really like this guy. I hope he gets the decima tomorrow.
Top

I usually prefer the all-time regular-season list, which includes all the $50K+ winners. On that list Jason just passed Roger Craig to take over 10th place.

This is the second night in a row AT has given him the dreaded "kiss of death" comparison (which until this year was the comparison to KJ). Now the great players are getting compared to James. Somehow Jason has been immune to that so far, scoring two lock games (including tonight's major blowout) in the last two nights. For his sake I hope AT lays off the comparisons. Not that I'm superstitious or anything.
Top

Managed to get LT on Cuzco, Cossacks, and gigue. And very much surprised myself by getting a Children's Lit FJ to stay perfect for the new season. I almost whiffed that one as well, first misreading the clue and thinking they were going for the original/working title. Man, I've got to be more careful about these things.
Top

I thought Jason was in solid position to extend his win streak coming out of the summer break, but wow has he blown me away so far this week. Hope he can keep it going!
Dumb college kid. Go BR!
Top

I thought Jason would get reversed for saying The Sign of Four rather than The Sign of THE Four. But apparently the story has been published under both titles. That's good since Sherlock Holmes clues often go begging. It would've been a shame to see one missed on a technicality when someone actually knew the correct response.

Speaking of alternate titles, I was glad for confirmation that The Wizard of Oz was acceptable without a Wonderful up front.
Top
Post Reply
42 posts