Hemant's chat was about his prior claim to fame: https://en.wikipedia.org/wiki/I_Sold_My_Soul_on_eBay

For April Fool's Day J! needed a special effect of a shark swallowing the contestants when the 1974 book that went with the Orca was unknown.

The FJ! category had me making sure I knew the names of the three territories and ten provinces and where to place Prairie vs. Maritime. The category had me thinking I did not need to refresh capitals. How the provinces match up geographically with the territories? Nope, if I can't pick the right state yesterday for a 1-parter, then needing a 2-parter today was going to be a fail.

I matched Leanne and Kami for the dreaded half right. Hemant gets the win even though he had 0 right. 2nd place was the spot to be today entering the FJ! round. If there had been time to complete DD3 and the other three clues not seen then he could have led for the FJ! round and lost. There is always some good fortune involved in winning.
Top

You get the trap door today, Mark. I figured you'd at least have the North American map down.

You get the trap door today, Mark. I figured you'd at least have the North American map down.

Keep the executioner on the clock as he will busy throughout the day. The clue did not go well at Fikkle either. I did an archive search of "canada four corners" and did not find any prior clues. Are there different terms to turn it up?

What I need to do is perhaps revisit KJ's Maphead.
Top

My internal map of the world came in handy for this final. Instaget.
Top

It's in the archive: http://www.j-archive.com/showgame.php?game_id=6591

That FBI QUANTICO category was a nightmare to archive with the Clue Crew members having so much to say.
Top

I was confident in Saskatchewan but not sure which direction to go from there. I guessed right this time.
Never been on J!, but once won a knockoff version that aired on local access TV.
Top

I missed with Alberta and Saskatchewan--I knew that the Northwest Territory was big, but I didn't realize that it stretched that far east.

I got to see J! instead of a briefing today and watched off the DVR. I ran it back, and Leanne said "Kristen Gillibrand". I expected a score change before FJ!.

Edited later: I should have said Northwest Territories. I need some way of keeping that straight.
Last edited by Linear Gnome on Wed Apr 01, 2020 8:18 pm, edited 1 time in total.
Top

Another Alberta/Saskatchewan neg. Leanne grabbing that last clue was a Pyrrhic victory as the carousel keeps spinning.
Top

Linear Gnome wrote: ↑
Wed Apr 01, 2020 6:25 pm
I missed with Alberta and Saskatchewan--I knew that the Northwest Territory was big, but I didn't realize that it stretched that far east.

I got to see J! instead of a briefing today and watched off the DVR. I ran it back, and Leanne said "Kristen Gillibrand". I expected a score change before FJ!.

I live in NY, and I'm never sure of "Kristen" vs. "Kirsten", or whether there is an N somewhere in her surname. I'm not saying this speaks well for me or society, just reporting.

I answered FJ the same. I suppose I underthought it. But then in this David Madden-era game ("# of Canadian provinces that border the Great Lakes"), I remember thinking that
I thought "geosynchronous" was tough for $1600. What doozy lurked at $2000? Or maybe it just wasn't my subject. But how about "The Art of Racing the Rain" for $800?

Naperville seems like a cool place. You can work as a sports bettor or a blogger. I might have to give it a look.
I'm smart and I want respect.
Top

I'm a bit cranky about how those insufferably long FBI clues resulted in $4800 of history and science being left untouched. Costly neg with Knights Templar on Crusades $2000. Not my best night, but 3/3 on the bonus clues makes it easier to swallow.

FJ came to me immediately, then I questioned how far east NWT reaches, then decided to trust my instincts.
Last edited by mas3cf on Wed Apr 01, 2020 9:00 pm, edited 1 time in total.
Top

I guessed nothing on that crystal clue because I didn't know whether it was Waterford or Swarovski. After a quick search it sounds like Swarovski would be the one associated with figurines. I'll to remember that one.


Linear Gnome wrote: ↑
Wed Apr 01, 2020 6:25 pm
I missed with Alberta and Saskatchewan--I knew that the Northwest Territory was big, but I didn't realize that it stretched that far east.

Be sure to remember that it's Northwest Territories if you are ever on the show! That has been deemed incorrect before.
Top

Seems like a good reason not to give the first name--only one opportunity to mess up.

(posted at the same time as bluejaylink's post! Thanks, bjl!)
Top

Ran Going Pronoun but otherwise really struggled with this board.

I also thought Potent Potables was very tough. Strangely I got only $800.

I fell for the "shoe bomber" negbait too.

Frustrating miss. I knew what four corners they were talking about, but my mental map had them all too far west. AB/SK/MB always blend together in my head just like Jupiter-Neptune.

For DDs. Guessed I, Claudius for Ben-Hur, and jeers to the contestants for running away from Science Terms & Crusades, not getting to the third DD.

Knew I heard Mehta's name from somewhere before the interviews

I figured the one none of them said was obscure enough to be the answer and paired it with Saskatchewan.

Then again, my first instinct was the Yukon...
"Who said anything about a horse?!"

MarkBarrett wrote: ↑
Wed Apr 01, 2020 11:32 am
Keep the executioner on the clock as he will busy throughout the day. The clue did not go well at Fikkle either. I did an archive search of "canada four corners" and did not find any prior clues. Are there different terms to turn it up?

Wouldn't have existed before 1999, so that narrows down the search.

Managed to guess right, more because I underestimated how narrow Alberta and British Colombia were, but a get's a get
The best thing that Neil Armstrong ever did, was to let us all imagine we were him.
Latest movies (1-10): House (9), Alien: Covenant (5), Baby Driver (9), Planetarium (4)
Top

I noticed that Sarah was not wearing a seatbelt when she was riding in the FBI car. If agents want to learn invasive Lane changes, why don't they just come to where I live?

I instagot FJ, and I expected all three players to bomb it. Manitoba is like a black spot in Jeopardy players' knowledge. The new champ said Newfoundland and Labrador? That is one Province dude, not two, and how could you really think it is anywhere near the prairies? As I just said on Monday, there are only 10 provinces, and they ask about them frequently on Jeopardy. You need to know them cold.

If you really aren't sure whether it's Northwest Territory or Northwest Territories, just say NWT. They would have to accept that. Once I was reading a Canadian produced book that referred to the Territory Northwest of he Ohio River as the NWT, and I had to laugh at that.

I expect DH Kendall to weigh in here. I know one of your pet peeves is people who pronounce Portage as a Portazh. May I ask how you pronounce Lagimodiere? 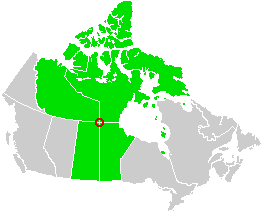 Last edited by floridagator on Thu Apr 02, 2020 1:03 am, edited 1 time in total.
I'd rather cuddle then have sex. If you're into grammar, you'll understand.
Top
Post Reply
52 posts