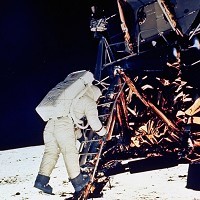 Is a lipid the same as a lipoprotein?
Top

It was great to see you win, Hannah. Our family was rooting for you! I hope to see you win all the more next week. It's interesting that before the reversal, John had nothing to lose on guessing on the last $2,000 clue, but after the reversal, a clam on the last clue would have given him a $600 lead and a second win. Good work tonight, Hannah!

Lots of writing was required in tonight's FJ. Luckily I zeroed in almost immediately on what tones they were referencing, and I nearly had the entire answer scrawled out before Alex was finished reading. It was a long time coming for me, as not only was I 0/4 this week, but I finished 0/4 last week, missing 8 consecutive FJ clues, with my last successful effort coming two Mondays ago with Macedonia. Some suggested last week that they may have accepted "Les Mis" or "Phantom", and I similarly was wondering if just "Close Encounters" would have been accepted tonight. I doubt it, but who knows, because that was a lot of writing to require in 30 seconds. By my count, "Close Encounters of the Third Kind" requires 29 characters, (3rd instead of Third would cut that to 27) just short of the 31 needed for "Les Miserables + Phantom of the Opera". I'm a little afraid to ask, because there is probably someone on this board who will immediately know the answer, but I wonder what the record is for most characters required for a correct FJ response?
Top

heisman65 wrote:Is a lipid the same as a lipoprotein?


No. A lipoprotein contains a lipid, but is not itself one.
Top

No shot on FJ, have never seen that movie. My first time to click the box of shame in the weekly poll this season.
Top

Bamaman wrote:No shot on FJ, have never seen that movie. My first time to click the box of shame in the weekly poll this season.

I haven't seen it either, but thankfully that musical phrase has been referenced on the Simpsons, among other things. 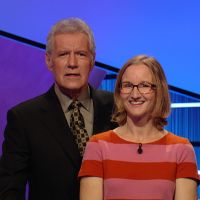 College really paid off- Salt Lake City was an easy get for me as a Utah alum. And during the interminable wait before FJ! I kept getting anxious over the category since obviously John had the background to nail it. Then I remembered I got my graduate degree at USC in film and took a whole freaking class on Spielberg and relaxed.
Top

When I saw the FJ, my first thought was that it was "Also sprach Zarathustra" from 2001: A Space Odyssey, but then I realized it didn't fit the tone progression described. Then once I hummed the tones the way it was described, I knew it was from Close Encounters of the Third Kind. Even though I've never watched the movie all the way through, I've seen enough of it to recognize the famous 5 tones.
Top

This doesn't mention the tone progression, but it's still one of the coolest scenes ever in any movie:

kslgbr wrote:I believe something happened today that is pretty rare.

I know I've seen it happen at least once before, in the last four years.

Instaget of all instagets on FJ. That makes bookends for the week.
Ran Jock to Politician (precalled Kemp), Choices, and Marching. Shut out on Gadgets. Picked up Havana and Canadiens trash. Hosed myself by answering Neolithic for Stone Age.
Disappointed that Emerson, Lake and Palmer didn't come up in Group "E"s.
Top

Congrats, Hannah, on the win!

I was scratching my head about the Maine stumper, I guess because of its historical importance, and because it's a prominent monument at Arlington National Cemetery (and, for a considerable time, held the remains of a Polish pianist and President-In-Exile, Mr. Paderewski). I actually did ok in that category, partially thanks to some of Rod Serling's work (I think Night Gallery, maybe) where they had some sort of pariah who kept showing up on doomed ships; it started with him on the Lusitania, knowing it was doomed, and then with him reviving on the Andrea Doria (IIRC, it hit the Stockholm?)

And Victorinox was an instaget; I've carried a SAK for ages, which gets me in trouble when I forget to take it out of my pocket where it's prohibited. (BTW, Wenger also used to make "official" Swiss Army Knives, but Victorinox bought them out a few years back.)

FJ was a semi-instaget; once I hit the octave drop from to the fourth tone, I knew it could be nothing else but that. And, no, if you were around then you didn't have to see the movie. There was a discofied version of it that was played (too much) on the radio -- same guy who did the Star Wars disco version, and it's been borrowed in many places (Moonraker for you James Bond fans, among others).
Top

kslgbr wrote:once I hummed the tones the way it was described, I knew it was from Close Encounters of the Third Kind. Even though I've never watched the movie all the way through, I've seen enough of it to recognize the famous 5 tones.

That's exactly how I got it - by humming the tones as described. It probably helped that I had recently rewatched this John Williams a capella tribute that went viral on YouTube a few years ago. Watch the first 15 seconds or so and you'll see why it was so helpful. Watch the rest because it's fun.

Like several others, this FJ kept me from zilching the entire week.
Top

On that SLC clue I immediately re-heard Johnny's voice saying "This is... the Place" from a couple of weeks ago.

Havana did not come to me either as I blanked and was only thinking US cities. No chance on Victorinox. Yes on Lipoproteins, Canadiens, and a couple of other stumpers.

This was my only FJ get this week. I immediately figured it out (I also remembered the Simpsons reference), then thought Close Encounters was from the early '80s. I went over the tune in my head, realized that it is definitely Close Encounters, and went ahead. On the "Millionaire" phone game my worst category was films by year of release so my misplacing the date by about four years wasn't much of a surprise. Some day I'll see Devils Tower with my own eyes; I came close on two trips but not yet.
Top

Havana will have to be on the poll tomorrow as not just a TS, but WT H(or F) TS. That had to be mixed feelings for John to get a movie FJ, but to be trailing entering FJ. He could be hopeful that he could get it and Hannah could miss, but leading is the preferred path.

Nice solve and wager Hannah to take the match and champ's podium.

The FJ clue is one where I was tempted to turn off the TV. After 30 seconds I could not figure it out. On delay I would have figured it eventually with the light bulb going off. Perhaps after eating mashed potatoes?

It seemed so simple once John's response was shown. I read the clue once and did not recognize the quote. From there I paid no attention to the wording again and just brainstormed movies from the '70s. I was another also messing with Kubrick's 2001 with year quickly taking care of that one. Grease, Rocky, Jaws and Saturday Night Fever were considered. I was trying to find famous music or a musical. With time almost gone I scribbled Cabaret, but knew that was useless.

I saw CEOTTK not as a first release, but later in the '80s sometime. The movie did nothing for me and I haven't seen it since. If I would have taken the clue and just thought of the directions aloud like those that could be written for the Dragnet theme then it would have been a snap.

It's extra frustrating to miss when it's a good category and a cool clue. Good one writers.

North Face on a non-ringing in, verbal shot in the dark for the tent one by me.
Top

Congrats, Hannah! So fun to see you win after reading your posts this week. You did a good job of keeping the secret.

I liked John, too, though.

Nice to see another crossword fan on the show. Are you doing the online championship this weekend? http://www.crosswordtournament.com/online/index.htm I'm going to try it for the first time...

Best of retro luck next week! And best of real life luck on your marathon this weekend.
Top

Snaxx wrote: Some day I'll see Devils Tower with my own eyes; I came close on two trips but not yet.

You know it's made of mashed potatoes, right?
She caught the Katy and left me a mule to ride.
Top

alietr wrote:And does anybody else get a Bernadette vibe from her?


Snaxx wrote:On that SLC clue I immediately re-heard Johnny's voice saying "This is... the Place" from a couple of weeks ago.

Same here. I wondered at the start (especially considering her speed) if Hannah saw the episode from the audience as well, but Snaxx's comment of "a couple of weeks ago" tells me it wasn't as recent as I thought it was, and she probably didn't.

The tones were pretty easy to "read" from the clue, and I am now, for the first time in a long time, actually looking forward to Mark's poll, because I can mark the 5/5 box!!! (Watch, he'll pick 3 bonus clues I tanked on, an 8/8 would be even nicer.) The fact that several boardies whom I look up to as being smarter than me are complaining that it's a 0-fer or 1-fer week for you makes my 5/5 that much happier for me! (Apologies to the aforementioned boardies, but I can guarantee that the universe will be back to its regular karma next week. Just let me have my moment.

)
"Jeopardy! is two parts luck and one part luck" - Me 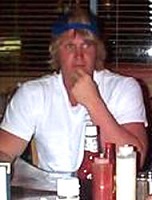 The Andrea Doria collided with the Stockholm in dense fog twenty-one miles off the coast of Nantucket. Le Master wrote:The Andrea Doria collided with the Stockholm in dense fog twenty-one miles off the coast of Nantucket.

The Gordon Lightfoot was rammed by the Cat Stevens.

She caught the Katy and left me a mule to ride.
Top
Post Reply
80 posts