FINAL JEOPARDY! CLUE
Roland Garros, for whom the French Open stadium is named, gained fame with the 460-mile 1st solo flight across this body of water

Alex got the first laugh of the game as after he came out he pointed towards T.J. and said, "We'll talk."

Ryan is in the middle of the pack for the ToC tracker and he can only go down. While I appreciate he likes sports categories I would also like to see a broader knowledge base with things like the playwright for "Six Characters..." Ryan was kind of Jekyll and Hyde in five games with average, better, average, better, and back to average.

Ryan stumbled on SPORTS IDIOMS $800 when he could have had it with a little better letter counting. That left him with $1200 after DD1 on the next clue while I had a nice lead with $3600 on paper.

I hate when clues and valuation cost me when I "know" the material. The black firework for $2000 was so simple I clammed when I knew the right response. I lit enough of them back in the day. Funny to see a contestant negged for the dreaded too specific.

What to bet in SKIPPER $2000 box for that situation? I don't know though Ryan was perfect on DDs up to that point. Turned out not to matter as Ryan was going to lose no matter the bet.

The FJ! category had me precall the standard Lindberg and Earhart. From there I widened it to Yeager Doolittle. For fun my last one was Sullenberger in hoping for a "Chesley" hint.

The FJ! clue had me think of Gertrude Ederl's swimming feat and I could not imagine that matching the mileage given. Something bigger. I considered North Sea and Irish Sea while having no idea about size. Thinking closer to France I wrote Bay of Biscay to at least avoid the trap response I expected to see and will of course poll.

The correct response? Never thought of it and knowing me I would have 50/50/90ed it even if I did. Nice by the players to get it to 66%.
Top

MarkBarrett wrote: ↑
Tue Dec 01, 2020 1:54 pm
The FJ! clue had me think of Gertrude Ederl's swimming feat and I could not imagine that matching the mileage given.

Good point. Her swim was 21 miles, if anyone was wondering. (I looked it up.)

English Channel for me, though. I hope I don't get 15 in a row wrong to match my previous 15 correct.
Top

Everything the contestants didn't know, I didn't either.

Got the Daily Doubles

Went in the wrong direction for FJ & guessed North Sea.

For reference, the English channel is 150 miles wide at its widest, and only 350 miles long. I still said "English channel". The Mediterranean varies way too much in its dimensions for me to associate "450 miles" with any part of it. At the Strait of Gibraltar it's only 8 miles across.

Here's the flight route (roughly) from Cannes to Bizerte. 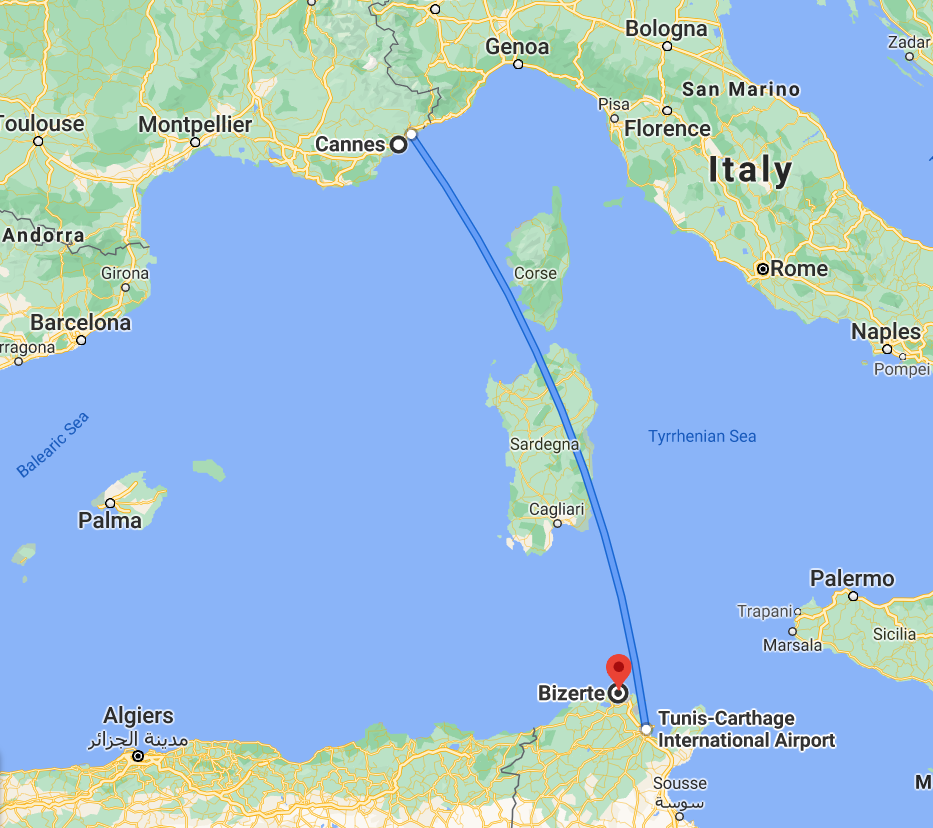 We know this today thanks to the courage of men like Roland Garros.
I'm smart and I want respect.
Top

Don't they usually accept UK/England pretty much interchangably? That was pretty sus.

"Snows of Kilimanjaro" rings no bells for me.

No guess on FJ! What even was the TOM?

Usually, but John Bull is specifically England. It's got nothing to do with Wales, Scotland, or Northern Ireland.

Took a few seconds to work out the distances -- and I even considered the Bay of Biscay -- but figured it had to be from somewhere in France to somewhere in Africa, so the Med.
Top

My first thought was "English Channel" but I was able to dismiss it.

Ended up going with the Bay of Biscay
Top

Started in the English Channel but switched to the right place in time.
Top

I think English Channel is a reasonably plausible guess here. Just because the flight was 460 miles doesn't mean that all that time was over water. Lindbergh famously landed in Paris on his transatlantic flight which is not exactly a coastal city. And obviously you can get over the Mediterranean in way less than 460 miles, Gibraltar being the most extreme example.
Top

Ended up going with the Bay of Biscay

That's an in-this-world guess, as the Bay is about 369 miles at its greatest length. Of course, you can reach Spain from France in a single footstep if you choose the right start and end points.
I'm smart and I want respect.
Top

A basic geography question. What body of water in the vicinity of France is at leat 450 miles across?
Seriously?
Top

In stupid answers, I just went with "body of water I'm 100% sure is associated with France": Seine. It's about the right length...482 miles...but obviously not the right width. I mean, theoretically, one could fly over and thus follow the river, but the wording of the clue makes that seem unlikely. But, on the bright side, I now know the locations of the North Sea, the English Channel, the Bay of Biscay, and the Mediterranean Sea.

Loved Alex's opening. Reminds me of that insurance commercial with the "avoiding becoming your parents" guy...BLUE HAIR! I was impressed with TJ getting the Hoover clue right, as I had no clue - was there a TOM other than "Hoover worked in the Harding administration"? Going by party and chronology, Coolidge would be the only other choice. Oh, researching it, that's really a Teapot Dome clue, with Albert Fall. Something I know nothing about. More to study!

In the "neg" category - financial, first name Charles? Yup, I took the bait and went with Schwab. If I'd concentrated on the "bull" part, and was given time, I maybe could have fixed my thinking.
Top

Two negs on the $1200 row. Former Disney CEO = I had Michael Eisner. Famed canals + European city = went with Venice. Not sure if I had seen the photo if that would have helped.

FJ - started with English Channel but (a) I knew Louis Blériot had that honor, and (b) 460 miles... no. Went to Mediterranean and was happy with that.

I'm chagrined that Alex got the pronunciation of Cheney incorrect. It's CHEEney, not CHAYney.
Last edited by floridagator on Tue Dec 01, 2020 9:11 pm, edited 1 time in total.
I'd rather cuddle then have sex. If you're into grammar, you'll understand.
Top

floridagator wrote: ↑
Tue Dec 01, 2020 8:57 pm
Error in presidents. Dick Cheney was vice president under George W Bush, not George HW Bush. I was expecting a reversal at the contestant interviews.

Far more than accepting that error, I'm chagrined that Alex got the pronunciation of Cheney incorrect. It's CHEEney, not CHAYney.

The clue was about the Cabinet, not the vice presidency.

The name is pronounced CHAY-nee.