I didn't know it was a logo, so I would have never gotten it.

Actually, my guess is more of a slogan too. I thought of Uncle Sam, thinking of the posters with "We want you". I didn't think it was right, but I could see that perhaps he had a black eye.
Top

After looking it up, I see that James Montgomery Flagg would have been 124 years old at the time 9/11 happened.
Top

The champ finally ran out of luck in his comeback. Nicely played game, all in all. My FJ thinking went from WTC to NYC to what body part could be bruised to the I heart NYC logo. Took me about 10 sec to get there.
Top

I had a stopover at Robert Indiana's "Love" piece, but made it to I ♥ NY with time to spare.

It would have been helpful to Bryce not to have hit the last DD (provided he knew how to wager from a trailing position, and provided whoever did hit it didn't make it mathematically impossible for him to win on a TS).
Last edited by seaborgium on Thu Apr 01, 2021 7:05 am, edited 2 times in total.
Top

cinemaniax7 wrote: Milton Glaser, the graphic designer who created the “I ❤ NY” logo and co-founded New York magazine, has died on his 91st birthday. Glaser was one of the most influential designers of the late 20th century, creating everything from magazines to advertisements to posters, including the iconic 1966 image of Bob Dylan with psychedelic hair commissioned for the musician’s first greatest hits album.

Ars Technica had a neat article in February about the discovery of the Tlingit fort used to defend against an 1804 Russian attack:
https://arstechnica.com/science/2021/02 ... 200-years/

Despite having drunk plenty of pints in my day...I'm apparently still unable to visualize them the right size. (Never mind that 'ordinal alcohol measurement' could only possibly be 'fifth')
The best thing that Neil Armstrong ever did, was to let us all imagine we were him.
Latest movies (1-10): The LEGO Batman Movie (7), Carnage (7), Baywatch (5), Tenet (10)
Top

I will put the under at 35% in the poll, with a chance of the low 20's. I guess the designer's name has some traction, but not to me.

What a good game, and I think the champ opened with four misses in a row. The Primer/Primer clue was cruel. I've never heard the children's book pronounced without the long "I". I guess our reading teachers needed more instruction. Dr. Oz was ready with the neg and didn't spoil the rebound. "Primmer" seems more like a British pronunciation. Bryce seemed nervous and out of sync until he caught his groove.

I thought Kevin's betting was suspect until I saw the math later. It's a tough call, but I agree with Linear Gnome that you have to seriously consider the stats - are triple stumpers more frequent than miss by leader / makes from third (rhetorical question)?

I hope Emily plays a whole game tomorrow the way she took over SJ today.
Disclaimer - repeated exposure to author's musings may cause befuddlement.
Top

NY" logo was designed to promote New York state tourism (and the trademark is owned by a state agency), but it's often assumed that it specifically refers to New York City.
Top

All three players played really well but I'm disappointed that the streak continues.

I did not know the correct pronunciation of row (argument/fight pronounced like cow) or primer (school lesson pronounced like uhh..all I can think of is Ursula K. Le Guin jargon) and I'm pretty sure I was taught those incorrectly in school. Glad I got to learn something new.

Recently watched Bad Trip which had Tiffany Haddish and missed that clue anyway. She looked different in the movie. A credit to her transformative acting. I would have guessed right on a DD.

Poll request on Sununu. Bryce doesn't look old enough to remember George H. W. Bush's Chief of Staff and I think the other path to that is to know all the governors.

Said Pie instead of Pie Pan but I think that's ok because they didn't ask for the utensil. A pie is about the size of a pie pan. Said railway instead of railing which is wrong.

I'm not used to calling a contract addendum a rider although I see that term in lawmaking news sometimes. Contract updates go by "Change Order" in my experience. There is probably a distinction between the two.

Some clues that I missed that I want to get next time are Chumash/California, The School for Scandal, Mac and Me, and Cameron Diaz. I'll also get Oslo/Christiania next time which is a really basic one. I also really want to get Bernini next time. I like his work but I've missed that one a bunch of times now.

No problem getting fifth. The standard 750 ml bottle is approximately 1/5th of a gallon. The 1750 ml bottle commonly called a handle is about 1/2 of a gallon. Carlo Rossi is probably still the cheapest way to get drunk. That comes in jugs.

It wasn't canon before?? He has done notable work for more than a decade. I like his comic with the acronym "I'm So Meta Even This Acronym"
I had a dream that I was asleep and then I woke up and Jeopardy! was on.
Top

Uncle Sam here, in retrospect, I guess it is not a "logo". Great game I thought
Top

I got hung up thinking of the Rosie the Riveter "We Can Do It!" poster. I realized that wasn't exactly a logo, but by then I'd wasted too much time and couldn't change direction.
Last edited by This Is Kirk! on Wed Mar 31, 2021 11:45 pm, edited 1 time in total.
Top

NY" logo was designed to promote New York state tourism (and the trademark is owned by a state agency), but it's often assumed that it specifically refers to New York City.

Weren't the commercials seen around the country? That's why I thought this would play easier. And Milton Glaser is a logo legend!
Many of the spots included the Upstate outdoors...


The "bruise" is described thus in Glaser's NYTimes obit. (What do you know, reading obituaries can help on J!...Odd that never occurred to anybody around here...

I'm sure nearly all of us are familiar with the "I [heart] NY" advertising slogan, but it just didn't click as being a logo is the most likely explanation. Also I kind of assumed something being described as "bruised" suggested a anthropomorphic logo.
Top

I have lived in the NYC area all my life, I got it right, but don't remember the modified campaign.
Top

Some good moments for me in this game:

Matched Bryce initially by saying Levi's, but bounced back after I remembered those Brett Favre commercials and his real. comfortable. jeans. I'd love to know if old number 4 helped anyone else out with that one.

Did the same in DJ when I matched Kevin by saying Faust, but remembered my Marlowe flashcard, as well as my Thomas Mann flashcard and switched to Faustus in time.

It also took me a few seconds to zoom in on the TOM in DD2, but as soon as I found Sitka, I remembered that it was once the capital of Russian Alaska, and matched Kevin's conversion.

It all ended on FJ though, as I was as lost as many seem to have been here as well. I can't blame the writing this time, as all the pertinent information was there, I just never got on the right track. Props to those who got it. 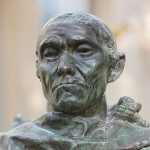 The correct FJ response never crossed my mind — I don’t consider it a logo. Slogan, yes. I’m expecting ~25% in the poll.

NHO the “primmer” pronunciation. I guess I’ve been mispronouncing the name of my Fact Primers series for several years now


MattKnowles wrote: ↑
Wed Mar 31, 2021 11:06 pm
Poll request on Sununu. Bryce doesn't look old enough to remember George H. W. Bush's Chief of Staff and I think the other path to that is to know all the governors.

The current guv’s brother was a senator about a decade ago, so there have been a lot of Sununus running around in NH politics. It might have been a little more difficult had the contestants still been bouncing around, and the previous few clues not primed (or is it primmed?) us on the format of that category’s correct responses
Hate bad wagering? Me too. Join me at The Final Wager.
Top

1. I [heart] NY was a slam dunk for me. And I've only spent brief amounts of time out of California. West Coast native for sure. The designer of the logo was no help. But when I think of 9/11, I think of NYC first. The added words sealed the deal for me. Very surprised it was a triple stumper, and even more surprised at the number of people here who missed it. Personally, I think a bandage would have worked better than that dark spot. But I'm not a logo designer.

2. Clearly, more British TV is needed. Row and primer are trivial if you've listened to enough British productions. I was also introduced to the "odd" pronunciation of "primer" in primary school. We always had to take out our primers for the reading lesson.

3. I'm a near teetotaler, and I still know what a fifth is. Had that one before the players rang in.

4. Did no one notice that 3 of the 4 people on stage were MD's (or MD in training)? Thought that would be worth a mention. It's not impossible to have happened before, but it may not have.
--Peter
Top

I can't remember which humorist coined the line, if you knew what sununu. (Mark something?)

I was seriously cheering for Emily.
I'd rather cuddle then have sex. If you're into grammar, you'll understand.
Top

I made a quick stop at Robert (not Roy!) Indiana's LOVE (he lived on an island in Maine we visit frequently), and then the Big Apple and finally just said Apple to be on the safe side. I wouldn't think of that as a logo. The revised version looks like an MRI of my heart after Covid.
Top
Post Reply
55 posts