OPENING REMARKS
Alex: Thank you, Johnny. Well, this is it, ladies and gentlemen, the deciding game of the Teachers Tournament, the second half. The dollar figures you see in front of the contestants right now will be removed from those screens. Sara, Francois, and Conor, good luck. Here we go into the Jeopardy! Round. And now, these categories are in play...

Alex: Welcome back. There are a couple of traditions that have been consistent on Jeopardy!. One of them is that if we make an incorrect ruling, we clear it up during the commercial break. And Sara, our writers have discovered that there is a drink called the metropolitan. It has cranberries, and it's a magazine.

Alex: Now, the other tradition, as you know, on the last day of our tournaments, the players get to talk about anything they want to talk about.

Sara: I wanted to talk a little about dogs, Alex. My wonderful boyfriend, Warren, and I have been foster parents for dogs for about four years now. We've fostered between 25 and 30 dogs for City Dogs Rescue in D.C. And it's the second most fulfilling thing I do in my life next to teaching.


Alex: Francois, what about you?

Francois: I just wanted to say hello to my daughter, Madeleine. She's nine years old at home. And my wife, Sujatha, will be watching.


Alex: Let me move on to Conor Quinn.

Conor: I just wanted to thank some of the people who came and helped me to get here today. My mom, Julie; my wife, Brittany, who are both here today. My friends Greg and Josh. My dad back home. My two sisters, Bridget and Eileen, both of whom just helped me study.

FIRE & ICE $2000: The patron saint of Mediterranean sailors gave his name to this phenomenon seen on the masts of ships in stormy weather

TRIPLE STUMPERS IN THE DOUBLE JEOPARDY! ROUND
CELEBS ON SOCIAL MEDIA $400: You can "Ask (this) Amy" about love, exams, volunteering & just about anything else on her "Smart Girls" channel on YouTube

THE WAR ON BACTERIA $1600: Sulfa drugs kill bacteria by preventing the production of this B vitamin acid that's crucial to life

VENUSIAN MONOLOGUES/MARTIAN CHRONICLES
Two-thirds for first place. Stratton's Dilemma.
Francois: Wager $8,401 to cover Sara.
Sara: You ought to wager to cover Conor, but since you cannot win on a Triple Stumper if you do so, you should choose between wagering $0 and maximizing your winnings by betting all $14,800. You are in Stratton's Dilemma, calling for a wager of more than $12,000 (to shut out Conor) or less than $2,000 (risking the possibility of being passed from behind by Conor). Go with the smaller bet if you believe a Triple Stumper is more likely than a singleton miss by Francois.
Conor: Consider risking $600, thereby beating Francois on the Triple Stumper (should Francois wager to cover Sara's doubled score). SOMETIMES CAPITALIZED $800: Capitalized, it's a magazine; lowercase, it's a cranberry cocktail its readers might sip
(Alex: [Calling on Sara] Sam?)
(Sara: What is Metropolitan/metropolitan?)
(Alex: No.)
(Sara: Sorry. Cos--)
[Originally ruled incorrect; ruled correct during contestant interviews.]

AND A BOOK $200: This author introduced the Pevensie children in "The Lion, the Witch and the Wardrobe"
(Alex: With less than a minute to go.)

ART: THE LAST 150 YEARS $2000: Neo-plastic is one description of the works of this Dutchman

ART: THE LAST 150 YEARS $400: Berthe Morisot, whose work is seen here was par of this group that in 1876 was called "five or six lunatics, one of whom is a woman"
(Conor: Who are post-Impressionists?)

THE WAR ON BACTERIA $400: A guy named Louis came up with this process of heating & rapidly cooling liquids to kill disease-causing bacteria
(Alex: Less than a minute now.)

Funny that a Derek Jeter clue came up today.

The writers got thrown for a curve with Sara finding an alternate acceptable response that matched a cranberry drink and magazine.

The FJ! clue was not for me as I wrote “NYT” to have something on my paper. It seems obvious after watching it go 3/3 while during think music I was no closer than dismissing Life and Look. I failed to process just how big those numbers of likes & followers were to think more globally.

Looks like there could be some number crunching Monday morning quarterbacking for Sara at DD2 and Sara not trying for second place in the FJ! round.

Conor had plenty of clue calls yet found no DDs. He needed to try some better hunting.
Top

MarkBarrett wrote: ↑
Fri May 17, 2019 11:06 am
The writers got thrown for a curve with Sara finding an alternate acceptable response that matched a cranberry drink and magazine.

The year in the FJ clue actually led me to Nintendo. It didn't make sense, but I had nothing better.
Top

What an outstanding FJ question. So extremely gettable, but only in hindsight for me.

Not much DD action. Sarah bet low on her dj. And what an easy q. That was her chance to make a move in the game.

And Francois only risked $1000 on his last chance DD. He is playing it conservatively.

I know 1889 was the year The Wall Street Journal was founded and I had trouble moving past that for about the first 15 seconds then I decided National Geographic better fit the category of photo-sharing and so went with that. If I had actually been there, I'm not sure how much I would have had time to write, but notice that Francois abbreviated National Geog. And nothing was said about that.
I'd rather cuddle then have sex. If you're into grammar, you'll understand.
Top

And the Books category was yet another 0/5. Blanked on C. S. Lewis, no hope on the rest.

No guess on FJ! It could be anything. If NatGeo had entered my brain, I would have rejected it as I didn't think it went back that far, nor did I think it was still being published.

First thought was Time Magazine, but Nat Geo came to mind after a few seconds and I liked that one better.
Top

floridagator wrote: ↑
Fri May 17, 2019 6:46 pm
If I had actually been there, I'm not sure how much I would have had time to write, but notice that Francois abbreviated National Geog. And nothing was said about that.

Maybe the fact that he wagered nothing played into not making an issue out of it?
Never been on J!, but once won a knockoff version that aired on local access TV.
Top

MarkBarrett wrote: Looks like there could be some number crunching Monday morning quarterbacking for Sara at DD2 and Sara not trying for second place in the FJ! round.

Shame, she seemed to be oblivios to the importance of her final wager, and how it could effect her winnings.
Without doing the crunching, I believe she could have had a lock on 2nd place for the tournament, had she gone big on the DD bet.
Probably wouldn't have gotten her a big enough lead to overtake Francois.
Top

Francois was head and shoulders above the rest of the field, many congrats on a fine victory! He had a lot of success toward the bottom of the board over his four games; that said, I would not be surprised if he plays his way into the second week of ToC competition.

Agreed, though my end result was luckily the opposite of yours. Definitely some potential detours this time.
Top 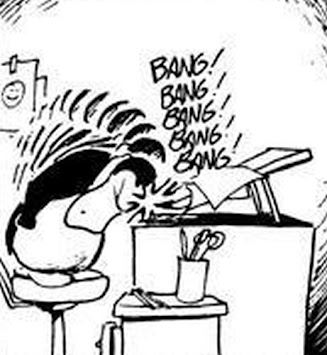 Sara, Sara, Sara. After Francois built up that lead yesterday, she had ONE chance to get back in the game: go all-in with her $8600 when she landed on the DD. A little bit of me died when she risked only $3000 and sealed her fate. Francois got FJ right, so she would have lost anyway, but at least she'd have given herself a CHANCE.

Congrats to Francois for four well-played games. If he has any luck (which remains to be seen since he has yet to need it), Holzhauer will still be the reigning champ when the next TOC comes up and he won't have to face him.
Top

Something I never expected to see again...a Daily Double on the last clue of the round.

If I ever see a Celebrity tweets category again, it'll be too soon. WGAF?
Wasn't too sure about Nat Geo but had nothing else, so I got FJ.

I guessed Kodak for FJ! I seemed to have completely misunderstood what the clue was asking

. Those numbers seemed too big for Kodak, but I couldn't think of another photograph company where 1889 seemed reasonable.
Top

Vowela wrote: ↑
Sat May 18, 2019 1:14 am
I guessed Kodak for FJ! I seemed to have completely misunderstood what the clue was asking

. Those numbers seemed too big for Kodak, but I couldn't think of another photograph company where 1889 seemed reasonable.

I thought of Kodak first because the year sounded right -- in fact, the company was founded in 1888 -- but the word "published" in the clue wasn't a good fit. Couldn't pull the Geographic in time. Nice FJ for a Teachers Tournament, though.
Top
Post Reply
37 posts