FINAL JEOPARDY! CLUE
The last single-named actress to win an Oscar was this woman who won for her supporting role in “Precious”

Easy TS to smell coming: The county highlighted on the Nevada map where LV is located.

The FJ! category had me precall Cher and Madonna. I stopped the precall game when Topol occurred to me.

The FJ! clue had me ready to write Cher though before my pen could move I saw the end of the clue. You give the movie, I darned well should be able to identify the one-named performer who won an Oscar. After I was done locking in the correct response I knew there was an apostrophe in there somewhere while not knowing where to put it. Realizing it would not matter for J! purposes made for a very relaxing 30 seconds of music.

If the clue had been: The last single-named actress to win an Oscar was this woman who won for her supporting role in a 2009 movie

That clue would have easily eliminated Cher while making the solvers work harder. I'm glad I don't have to worry whether I would have solved that version or not.

FJ: Yeah, that information was nowhere to be found in any deep, dark recess of my brain.
Top

Not able to Push out the right response, eh?
Top

So much for the Holzhauer effect, eh? Of all the five-game winners after him, the only one who has distinguished himself as an aggressive wagerer has been Sam Kavanaugh.
Never been on J!, but once won a knockoff version that aired on local access TV.
Top


Same here, even when spotted the film.
Top

Stupid hockey game. At least my local affiliate reruns the show at 4:30 am the following morning. So I'll get to see all the games and just be a day behind for the rest of the week.
Top

Interesting. I thought providing the movie title was too much.
Top

I'm sure I've heard of Mo'Nique, but I know I've never heard of the movie "Precious". There was a zero percent chance of me coming up with her. Cher and Madonna were the only two actresses I was going to come up with and I picked Cher.
Top

This is the "Attack on Titan" page shown for the manga, not anime clue. I only read on Reddit and saw that someone wanted to see it if anyone wants to share. Spoiler because of size:
Spoiler
Show 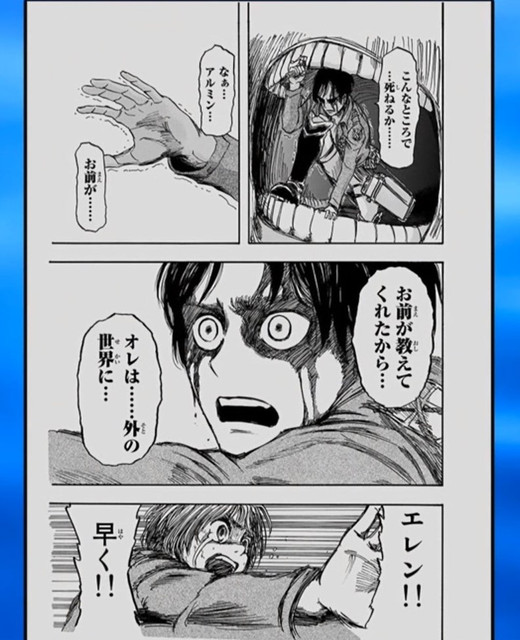 I trust that J! did not use any cussing in the clue?
Top

A tale of two rounds. Missed only three clues in J (2 in Pharaohs and one in Where Ya From?), then in DJ got shut out in Literary New Year and would’ve been as well in TV Tough Guys if not for Kojak. Not having streaming services hurts for modern TV.

Another instaget FJ, I remember that film for the super long official name (Precious: Based on the Novel Push by Sapphire).
Top

It was pretty blatant that Johnny wasn't in the studio, as Clay Jacobsen managed to get his empty podium in the shot. Usually they hide that.

Of all categories, I ran "Toot".

I knew George Eliot = Middlemarch on my contestant test in July, but it's apparently fallen back out of my head since then.

Kojak was the only name I recognized in that Tough Guys category. NHO "Barry" and it seems way too obscure for a top box clue.

No guess on FJ! NHO the correct response.

Couldn't pull George Takei or Patrick Leahy, both of which I would have gotten 90+% of the time.

I counted "unique" as right for DD1 because I can't see why it is wrong. If someone can tease it out, I'll mark it wrong.

FJ... I had no friggin' idea. I've been putting my nose to the grindstone studying movies but it almost feels like a moving target. In reality, I just don't think I have a great sense of what constitutes J!-worthiness in the entertainment fields.
Top

You really should learn to use the search function...


I counted it as a "no harm, no foul" at first, but I think I'm giving myself credit. I looked it up in Merriam's Thesaurus online, and it goes both ways in terms of synonyms, and the "uni-" prefix literally means the word "one". In fact, that's why it's incorrect to say something is "very unique" - it's like saying someone is "very pregnant" - something is either unique/one-of-a-kind, or not unique. There's no in-between.

Another question for the JBoard judges: Gabriel's...horn? There's a phrase (I guess it's a song?) "Gabriel go blow your horn", so that's what I went with. Nothing in the clue disqualified horn. Is there some subtlety that I'm missing?

I just got Mo'Nique (sans apostrophe) written down under the Think! time. My brain was whirring. I knew it wasn't Gab Sid (knew the full name, not going to attempt to butcher the spelling), and had to dig deeper. Mariah? No, she's not a mononymic figure, even if "Mariah" is enough for most people to know who you're talking about. Then, I got Mo'Nique's face. Could NOT get the name. Then..."Unique" came to me, but that's the name of a transgender character on "Glee". Finally, I got to Mo'Nique right before the "BONG BONG" of the theme.
Top

Is there a reason anyone should know Mo'nique? She only gets six other Archive hits, of which only one (a $600 clue from 2011) required her as the correct response. She doesn't seem to have done anything noteworthy after Precious either.
Ten Pound Hammer

TenPoundHammer wrote: ↑
Wed Jan 01, 2020 9:16 pm
Is there a reason anyone should know Mo'nique? She only gets six other Archive hits, of which only one (a $600 clue from 2011) required her as the correct response. She doesn't seem to have done anything noteworthy after Precious either.

Mo'Nique is an Oscar winner and like the J! champ title it has no expiration date. Charlie Chaplin was in a recent correct response. What has he done lately?
Top
Post Reply
62 posts